It might be cliche, but it’s true: teamwork makes the dream work. When people collaborate on a project, you often end up with something that’s greater than the sum of its parts.

At times I’m sure we’ve all had those projects that fall apart for one reason or another, although it is usually due to a communication breakdown.

If you’ve worked in the digital space, either as a developer or as a designer, you’ll be familiar with how tricky it can be to translate a brief and a design through to a living, breathing website. You’ll also understand just how key communication really is.

There’s a bit of a stereotype of web developers (and I.T. people in general) being a little lacklustre when it comes to working as part of a team. At Make, we believe that soft skills are just as important as your technical know-how when it comes to the web team — and that attitude helps us work together and build great products for great clients. Here’s a look at some of the soft skills that I’ve found the most useful to be an effective web developer.
Communication

It doesn’t matter how skilled you are if you don’t communicate what you can do or what you think. Communication is going to tie into every soft skill in this list because clear communication is the foundation of effective teamwork and successful projects.

Web development is sometimes shrouded in secrecy, so it is vital that you demystify your work for your project managers and your clients. Nobody likes an iffy answer to questions like “Are we on schedule to hit the deadline?” or “How long will this take?”. They’re not always easy questions to answer with a 100% accurate time frame but answering clearly is still critical to keeping project managers, colleagues and clients happy.

It’s not just communication between you and your clients that’s important though, as it’s equally critical to communicate and collaborate with your fellow developers. Coding clearly and commenting as much as possible, and talking about common problems that you run into and how you solve them as well, will save you and the team a lot of time and stress. There’s no need to reinvent the wheel!

It takes confidence to say what you’re thinking. As a web developer, you have a lot of insights to offer when it comes to questions like:

As well as this, you will also have an understanding of UX, SEO and accessibility. These are things that you’re expected to know as a web expert, which others might not be thinking about. This means that you could use your initiative, highlight potential issues, and suggest changes to improve the usability, searchability and ultimately the ROI of the website you’re building.

Often, you’ll find that designers or clients come up with really cool ideas for functionality or layouts, or something that the project you’re working on will have to achieve. If you have any concerns about those ideas, it’s important to have the confidence to raise them early. You’re not squashing those ideas but you might need to reshape them in a way to fit a reasonable timeframe, to fit accessibility, SEO or UX standards, or for a variety of other reasons. If you don’t raise your concerns, you might end up spending a lot of time developing something that isn’t compliant with laws or standards, that doesn’t work as well as it did on paper or something that goes wildly over time and over budget — and nobody wants that!

It’s also important to be confident within your team. If you spot code that could be refactored or rewritten to perform better or be more secure, say it. For instance if you see a practice being implemented that might break GDPR, call it out. That’s how a team develops better working relationships, performs better on projects and puts out better final products — through helpful, constructive criticism.

At the same time, it’s equally crucial to be empathetic. It’s not going to be helpful if you go out of your way to deliver criticism bluntly or to constantly pick and poke holes in other peoples’ work. Working together as a group can be trickier than working alone because there are always things you’d like to do your own way instead of the way of somebody else. While it’s absolutely normal to be frustrated at times, those differences can actually be great learning opportunities; you might pick up a whole new way of coding things, a wider view of projects, or even a totally different skill set.

Imagine, you’ve hit a wall with this one piece of functionality within an element. It’s a nightmare. You’re staring at lines of code and you’ve gone so far down the rabbit hole that you’ve lost sight of the bigger picture of what the entire element is even supposed to be doing. We’ve all been there. Those moments of brain fuzz are the worst.

So what do you do? Continue to bang your head against the wall until eventually you break through? Or do you take a step back, zoom out and see if there’s a different way to approach this problem?

I’ve listed problem solving and creativity in the same section because, like empathy and confidence, I think they’re two sides of the same coin. Where empathy and confidence complement each other though, I think creativity more often than not is problem solving. At Make, we like to develop creative — not complicated — solutions for our clients. However, for more than just technical problem solving, creativity as a web developer can be really useful. It might mean that instead of just raising an issue with a portion of a design, you can raise that issue and suggest an alternative. It could also mean that you’re more able to use your initiative and “fill in the blanks”, freeing up your team to keep working rather than causing a bottleneck. I’ve personally found that it’s incredibly useful in responsive work, making decisions on how elements move and flow when going from super-wide retina screens or regular HD desktops, tablets and mobiles without requiring designs for each one of those steps.

Nobody wants to hear the “we’re a family” line, so I’m definitely not going to say it. But I will say that, for me, working as a web developer at Make has been a very social experience. I think that’s important to a successful department and a successful agency as a whole. While there are certainly days where it might be easier (especially during lockdown) to let being sociable fall by the wayside and while it’s definitely okay to take time for yourself if you need it, everybody knows it’s easier to work alongside people that you like!

It’s just as important to know who you’re working with as it is to know what you’re doing — so go along to those socials once in a while if you can manage it! 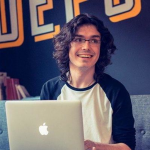